Seeking Safety In ETFs? Better Know What You Own

Seeking Safety In ETFs? Better Know What You Own 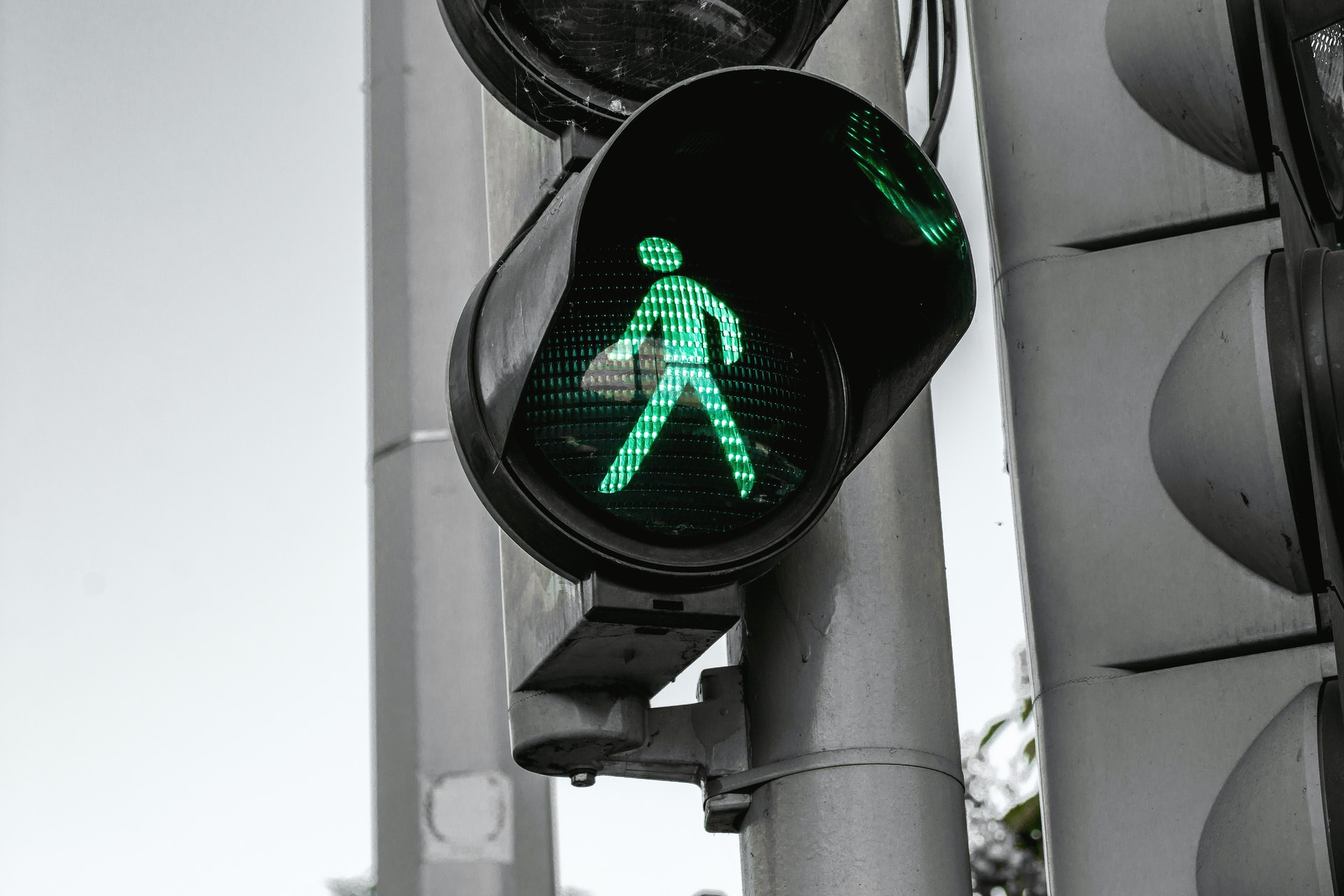 “Stay safe” has become a popular saying in The Age of COVID-19.

Things are changing so fast, though, it’s been hard to keep up with all the new rules regarding what qualifies as “safe.”

While governments are busy rewriting public safety rules, ETF investors are also rethinking where to find “safety” in the market.

However, if these folks were hoping for a tamer ride compared to the normal market roller coaster, they’ve been sorely disappointed. In the toughest stretch of the recent selloff, the ‘Low Volatility’ ETF fell more than the market. SPLV was -35.8% from February 19 through March 23 compared to -33.8% for the S&P 500.

Invesco’s ETF isn’t the only low volatility fund out there, but it holds over $9 billion in assets, which makes it one of the biggest. The strategy is to invest in the 100-most “stable” stocks in the S&P 500 based on realized volatility over the trailing 12 months.

Therein lies one of the problems. Although utilities have hung in there, REITs have been one of the hardest hit areas. Trailing volatility may not be an optimal way to forecast risk when a major paradigm shift happens. Like when government officials started telling people it’s okay not to pay rent.

Meanwhile, a lot of insurance companies underwrite catastrophe insurance, and could be facing an avalanche of claims.

Obviously, Coronavirus shutdowns have also weighed heavily on many retail businesses. Neiman Marcus, JCPenney, and many others like them, all face possible bankruptcy.

No wonder multi-standard deviation price moves have become uncomfortably common in 2020. Many industries won’t experience a typical V-shaped recovery, or any recovery at all.

In an environment where a high number of firms are facing existential risk, investors may want to think twice before committing capital to ETFs that only allocate based on historical data, like realized volatility.

Future volatility is what counts, and that will largely be determined by future fundamentals.

Are The Biggest ETFs Safe?

SPDR S&P 500 Index Fund (SPY) is one of the most widely owned ETFs, with assets under management totaling over $250 billion. SPY started trading in 1993.

For a long time now, SPY investors have prospered. Yet some market watchers are growing concerned by a new trend under the hood of that ETF as well. Their concerns center around the degree of concentration risk developing at the top of the S&P 500.

Basically, either Big Tech is going to eat the entire market, or there is trouble brewing in the most widely held passive vehicle of all—the S&P 500 index. 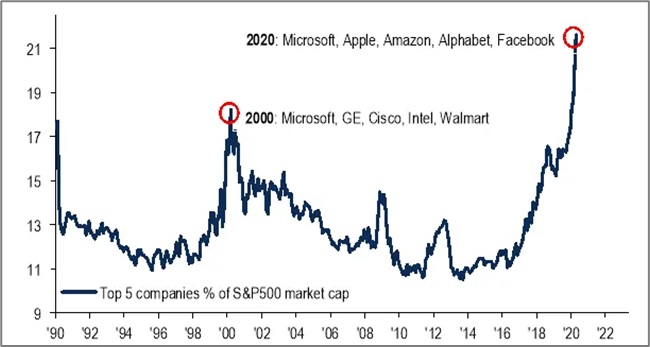 The current Fab Five include: Microsoft, Apple, Amazon, Alphabet and Facebook. Since 2016, those five have outperformed at a historic rate.

The last time the S&P was anywhere close to 20% concentrated in the top five names was in 2000, when Microsoft, GE, Cisco, Intel and Wal-Mart were at the top of the heap.

Will the current crop of mega cap darlings experience a similar fate?

One concern that may point in that direction is valuation. Taking a peek at current valuations versus the five-year average, three of the stocks (Alphabet, Apple and Microsoft) trade two-standard deviations above their 5-year trend. How does that make any sense at all going into a recession?

Alphabet and Facebook are economically sensitive, believe it or not. In recessions, advertising budgets get slashed. That will show up in earnings.

Apple is a pass, for me at least. The company sells high-end products. I’d rather own trade-down consumer names in this climate, like Dollar General and Dominos Pizza. Apple had to close stores and faces supply chain risk. Why pay a premium for that kind of uncertainty?

When retail investors recently piled into the biggest Oil ETF (USO), they were trying to nail a bottom in the toughest part of the market. Instead, they got nailed with an expensive lesson, courtesy of Mr. Market. 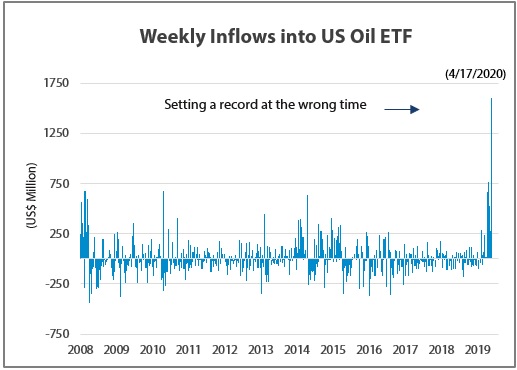 Right after that, oil prices imploded.

On Monday, oil futures turned negative for the first time ever. The May futures contract for WTI crude dropped over $50, settling at minus $37.63.

Forever is a long time, so word got around. News of the oil crash didn’t deter retail investors, though. The jaw-dropping event attracted even more.

Robinhood—a popular retail trading platform—saw over 90,000 investors buy USO in their portfolio, making it the most-added security across the entire platform, according to Robintrack data.

Thing is, USO isn’t really a direct bet on oil.

The ETF derives its price from futures contracts, which are periodically rolled from one month to another.

“There’s a huge cost of carry in the front of the curve,” Benn Eifert told Bloomberg. “The average Robinhood USO buyer and USO call buyer doesn’t know that, doesn’t understand that, or doesn’t care, and thinks they are just buying oil at a low price.”

USO investors got burned because they didn’t understand what they owned, or what exposures that entailed.

When Jack Bogle started the passive investing movement in the 1970s, he had a good idea and the right intentions. He wanted to help the little guy invest more efficiently.

But as we’ve seen with so many things throughout history, good ideas taken too far can become bad ideas.

Are we there yet with the passive investing mania? Mike Green of Logica Capital Advisers has done interesting work on this theme, if you’d like to explore it more.

For now, at least one thing is crystal clear: this is no time for lazy thinking about your investments. So make sure you know what you own.

This material is not intended to be relied upon as a forecast, research or investment advice. The opinions expressed are as of the date indicated and may change as subsequent conditions vary. The information and opinions contained in this post are derived from proprietary and nonproprietary sources deemed by Silverlight Asset Management LLC to be reliable, are not necessarily all-inclusive and are not guaranteed as to accuracy. As such, no warranty of accuracy or reliability is given and no responsibility arising in any other way for errors and omissions (including responsibility to any person by reason of negligence) is accepted by Silverlight Asset Management LLC, its officers, employees or agents. This post may contain “forward-looking” information that is not purely historical in nature. Such information may include, among other things, projections and forecasts. There is no guarantee that any of these views will come to pass. Reliance upon information in this post is at the sole discretion of the reader.​​  ​