3 Emerging Markets Stocks That Are Secular Winners On Sale

3 Emerging Markets Stocks That Are Secular Winners On Sale

Submitted by Silverlight Asset Management, LLC on May 18th, 2022 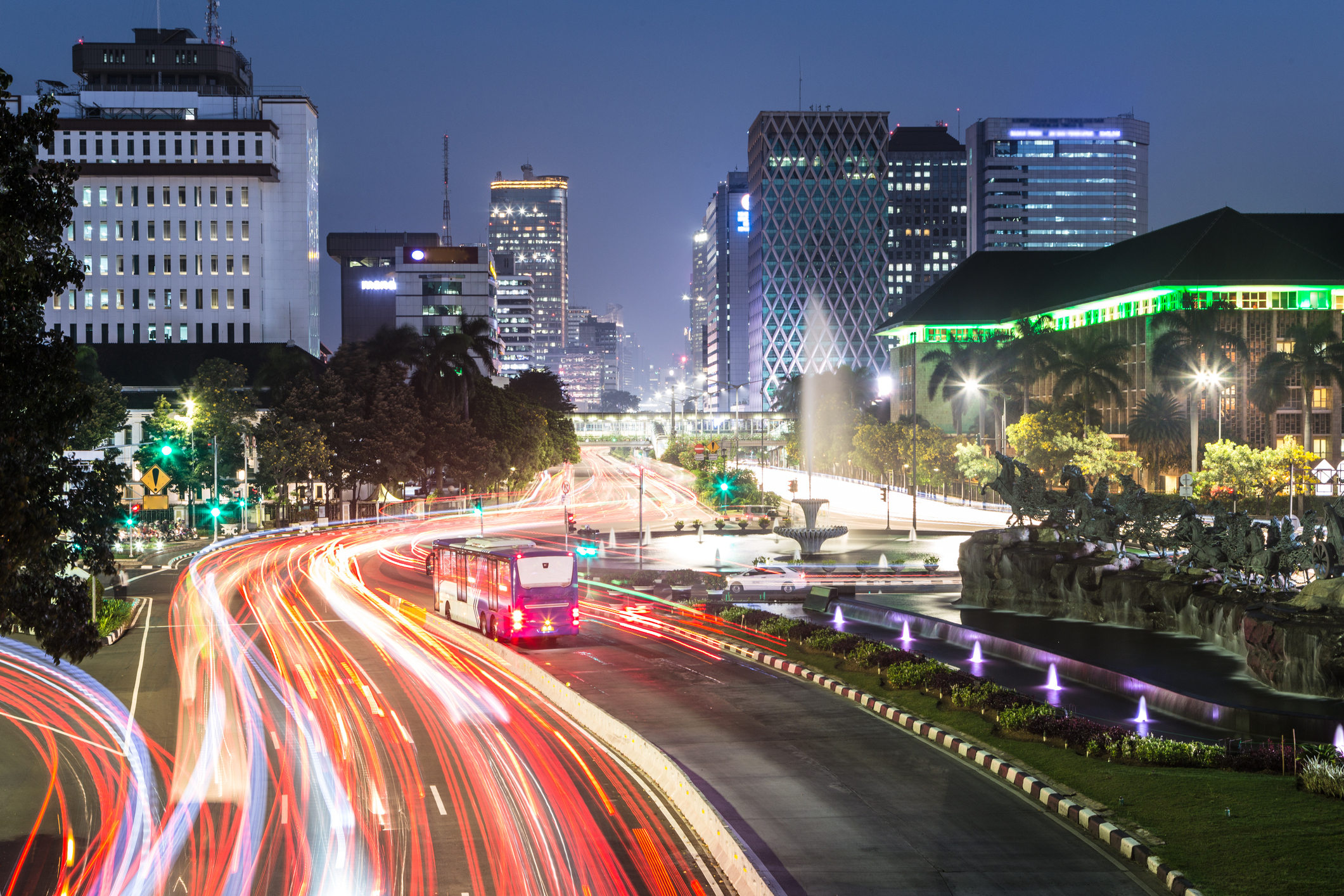 According to Lazard Asset Management, Emerging Market (EM) economies are responsible for about 60% of global growth, yet only represent about 13% of the MSCI All Country World Index (ACWI). This gap won’t disappear overnight, but it bodes well for EM’s long-term investment prospects. 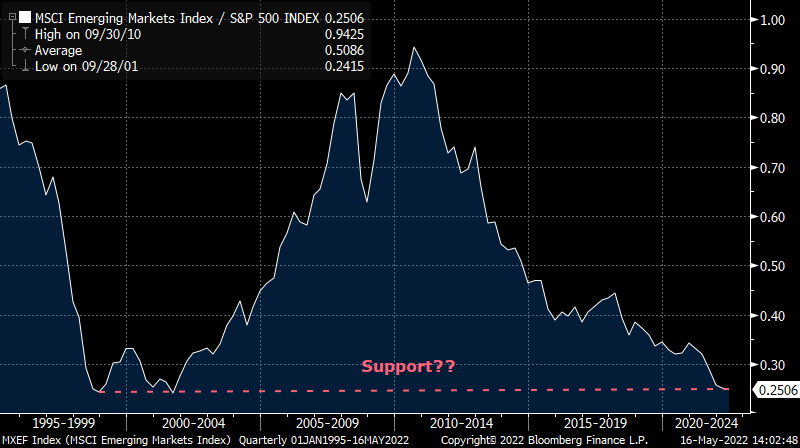 From 2000 to 2010, EM shares outperformed US shares mightily. Then, starting around 2010, EM equities entered a prolonged relative bear market that erased nearly all of the relative gains accrued in the prior decade. Now, EM shares have descended into a key relative support zone, which may foreshadow a bullish reversal.

Every decade sees new winners and losers emerge. So far, this looks like more of an inflationary decade, which traditionally favors shorter duration ‘value’ equities.

Geographically-speaking, EM represents an appealing relative value play. The MSCI Emerging Markets Index trades at 11.3 times this year’s estimated earnings compared to 20.1 times for the S&P 500. As shown below, this is one of the widest discounts favoring EM in the last decade. 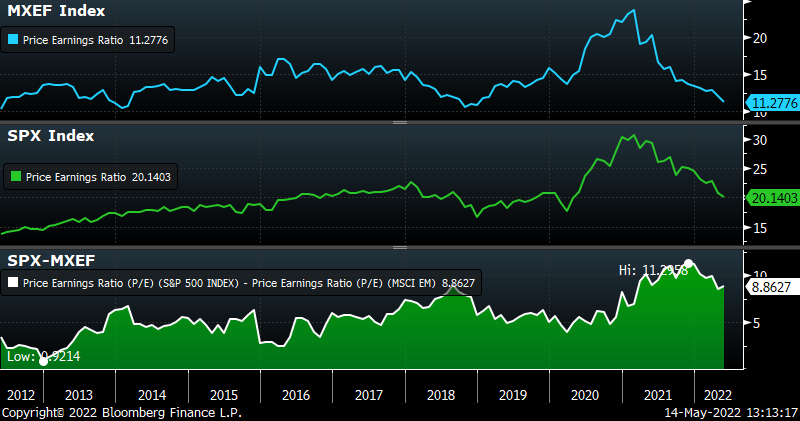 I don’t pretend to know exactly when or how this equity bear market will end. But I do know that once it does end, the risk/reward setup seems positively skewed in favor of Emerging Markets.

Here are three secular winners from the emerging world that look like attractive investments today.

TSM has benefited from the world shifting to a fabless business model. The term "fabless" means that the company designs and sells the hardware and semiconductor chips, but does not manufacture the silicon wafers or chips used in its products. Rather, it outsources the fabrication to a manufacturing plant or foundry.

If you know anything about the state of semiconductors, you know TSM has more business than it can handle right now. Meanwhile, Russia’s debacle in Ukraine probably lowers the risk China will invade Taiwan anytime soon. TSM shares trade at 13.3x EV/Est. EBIT, which is 1-sigma cheaper than the five-year trend and near the valuation where shares bottomed in March 2020.

MercadoLibre Inc. (MELI) is often called, “The Amazon of Latin America.” Amazon proved why scale matters in e-commerce, and MELI has over 30% market share in Latin America—a region with one of the best demographic profiles in the world.

In addition to its scale advantage, MELI’s economic moat also benefits from a network effect. MELI’s platform grows stronger as more users are onboarded. The company’s network of over 132 million active buyers is spread across an 18-country footprint, with most of its revenue derived from Brazil (55%), Argentina (25%) and Mexico (15%).

Wall Street analysts project MELI to grow sales and gross profit 45% in 2022. In an economy that looks more sluggish by the day, hitting anywhere close to those numbers would qualify as “amazing.” Meanwhile, you can pickup MELI shares near the lowest Enterprise Value to Sales multiple since 2009. 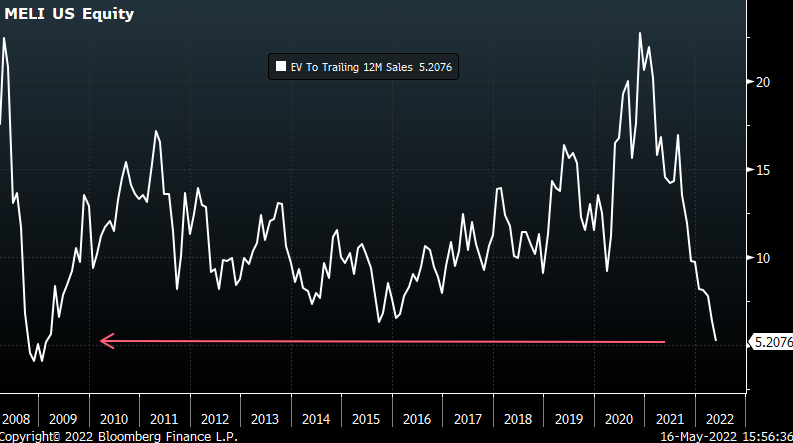 United Overseas Bank (UOVEY) is a multi-national banking corporation founded in 1935. The bank’s core market is Singapore, which makes up over half of its total assets. Other countries the bank has exposure to include Malaysia, Thailand, and Indonesia.

United Overseas Bank offers a wide range of services, including consumer, commercial and corporate banking; treasury services; wealth management, insurance, and brokerage services. The bank is poised to benefit from a recovery in major Southeast Asian economies that should fuel high single-digit loan growth that outpaces most large US banks. Net interest margins should also get a boost as the Federal Reserve keeps raising the Fed funds rate to combat inflation.

With a dividend yield exceeding 4% and trading at a forward P/E ratio of 10, United Overseas Bank looks like a bargain.

Disclosure: I own shares of TSM, MELI, and UOVEY in client accounts I professionally manage.  This material is not intended to be relied upon as a forecast, research or investment advice. The opinions expressed are as of the date indicated and may change as subsequent conditions vary. The information and opinions contained in this post are derived from proprietary and nonproprietary sources deemed by Silverlight Asset Management LLC to be reliable, are not necessarily all-inclusive and are not guaranteed as to accuracy. As such, no warranty of accuracy or reliability is given and no responsibility arising in any other way for errors and omissions (including responsibility to any person by reason of negligence) is accepted by Silverlight Asset Management LLC, its officers, employees or agents. This post may contain “forward-looking” information that is not purely historical in nature. Such information may include, among other things, projections and forecasts. There is no guarantee that any of these views will come to pass. Reliance upon information in this post is at the sole discretion of the reader.​​