Pioneer Natural Resources: One Of The Largest Dividends Out There

Pioneer Natural Resources: One Of The Largest Dividends Out There 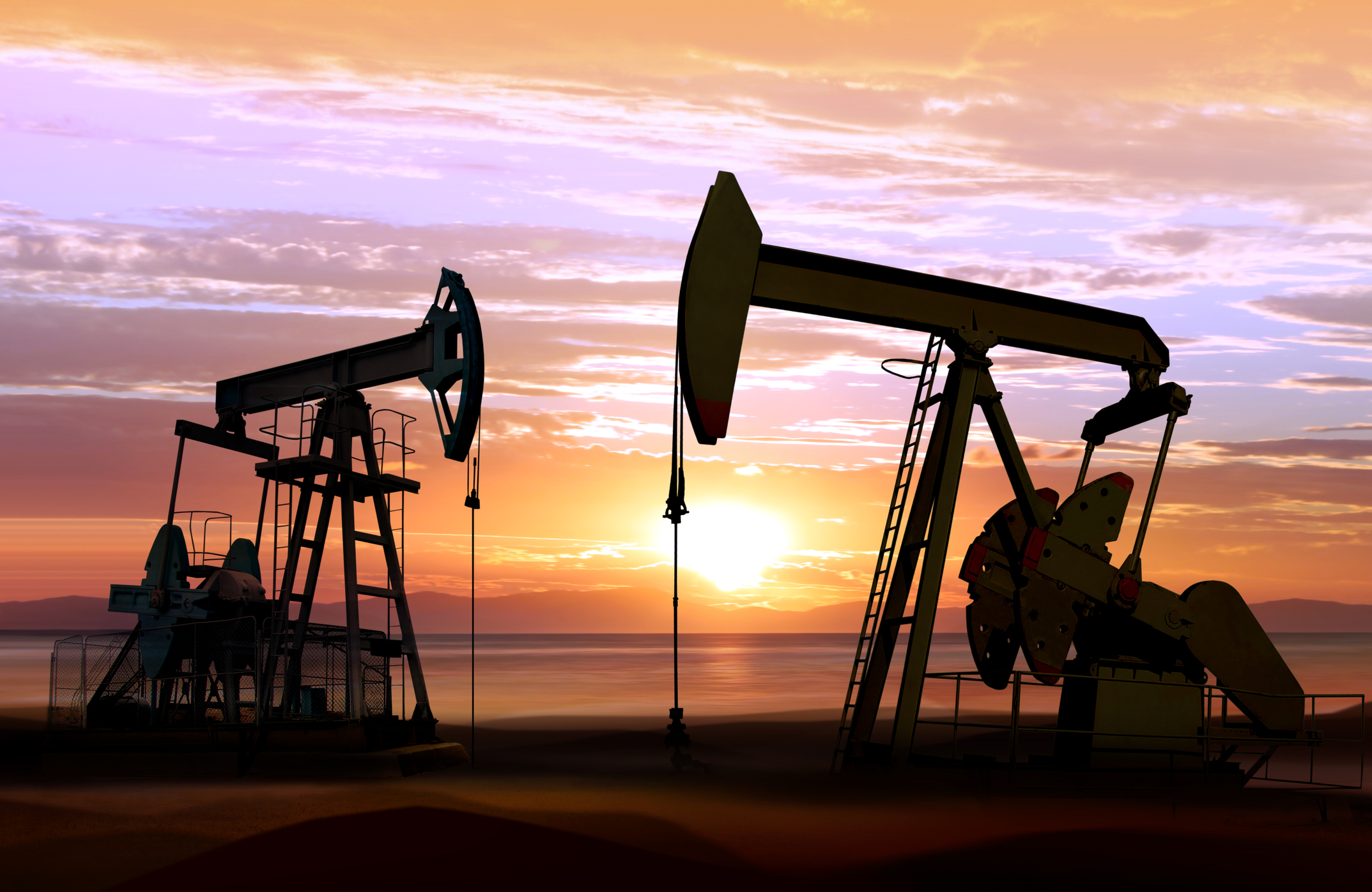 Pioneer Natural Resources (NYSE:PXD) is projected to earn above its cost of capital. With a dominant position in one of the largest hydrocarbon-producing basins in the world, PXD has a solid competitive advantage. The company also uses its high free cash flow to pay out one of the largest dividends in the S&P 500.

Pioneer Natural Resources' history begins in 1962, when two Texas oilmen named Howard Parker and Joe Parsley made the decision to explore in the West Texas Permian Basin. Parker and Parsley soon gained a reputation by making aggressive deals to grow their fledgling enterprise.

In 1997, Parker and Parsley merged with MESA Inc. to diversify into natural gas, and they adopted the name Pioneer Natural Resources. This independent energy company is now one of the largest energy producers in the Permian Basin.

With its main office in Irving, Texas, PXD manages 961,000 gross acres and has more than 15,000 spots for drilling. The firm produced an average of 617 thousand barrels of oil equivalent per day in 2021. PXD employees more than 1,900 people.

Over the past two years, as energy prices have climbed, PXD's cash flow has increased considerably, going from almost negative levels to long-term highs.

Even before the Russia-Ukraine conflict caused an oil shock, the oil and gas industry's fortunes have changed drastically as demand rebounds from the COVID-19 lockdowns. Also, after years of underinvestment in the energy sector, a shortage of supply has pushed oil prices up to levels last seen in 2008.

In recent months, oil prices have begun to recede. This is partly due to the temporary impact of the Biden Administration drawing down the Strategic Petroleum Reserve [SPR]. The SPR drawdown is set to last only six months, and it was announced earlier this year on March 31. 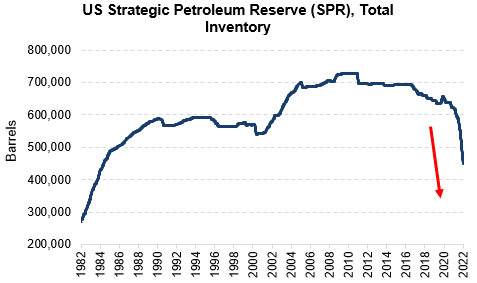 Source: Bloomberg, US Department of Energy 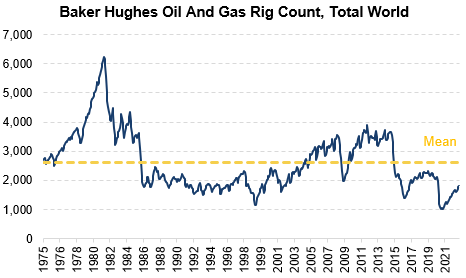 It's also worth noting that fossil fuels continue to occupy a large overall share of global energy consumption. The transition away from fossil fuels will take many years to materialize. This means there is strong potential for persistently high oil prices. 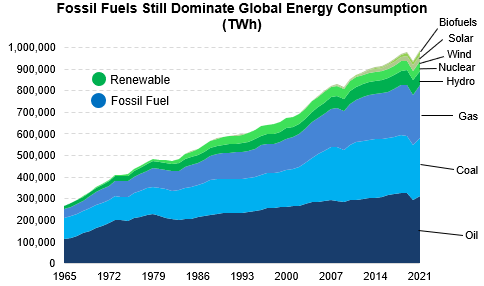 Following two consecutive negative quarters of GDP for Q1 and Q2 this year, it's apparent that we're in an economic slowdown. Therefore, owning companies with a strong balance sheet is paramount. Low debt is important in the energy sector due to the volatility associated with commodity prices. If a company has too much debt, an event that decreases the cash flow can push the company to insolvency. That said, PXD has a healthier balance sheet relative to its peer group. PXD's total debt to total assets stands at 21.3%, while its peer group's median is 32.4%. PXD's interest coverage is almost 3x its peer group. Its peers include Diamondback Energy (FANG), ConocoPhillips (COP), Devon Energy (DVN), and EOG Resources (EOG).

Also, aside from 2020 when the price of oil went negative due to the COVID-19 lockdowns, PXD's CFROI (cash flow return on investment) has consistently exceeded its discount rate since 2018. This has generated substantial shareholder wealth. 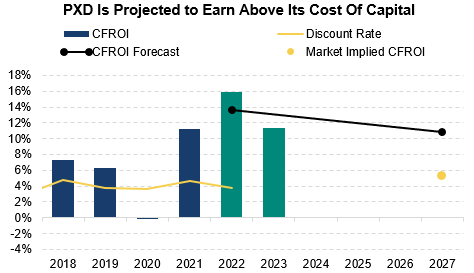 By turning accounting data into cash, the CFROI metric evaluates a company's ability to generate cash. Cash flow generation is a great way to measure a company's underlying economics. PXD is projected to beat the market implied CFROI of 5.3% by a sizable margin. Earning above its cost of capital indicates that PXD has a solid competitive advantage.

Over the past 10 years, the Permian Basin has been at the epicenter of the American shale oil boom. The Permian Basin is one of the largest hydrocarbon-producing basins in the world. Even though this resource-rich basin has been producing oil and natural gas for about 100 years, the U.S. Energy Information Administration estimates that the Permian still has proven reserves of more than 5 billion barrels of oil and 19.1 trillion cubic feet of natural gas. PXD is therefore well positioned geographically.

PXD also has a shareholder-friendly CEO named Scott Sheffield, who was previously Pioneer's CEO from 1997 to 2016. Sheffield came out of retirement in 2019 to serve once again while aiming "to enhance performance and capital efficiency" and deliver "strong results" for shareholders. For example, under Sheffield, PXD implemented a variable dividend policy in 2021 while maintaining consistent share repurchases.

PXD has commendable capital deployment discipline. Based on Q2's share repurchases and dividends, PXD returned over 95% of its quarterly free cash flow, which translates to an annualized shareholder yield exceeding 19%. 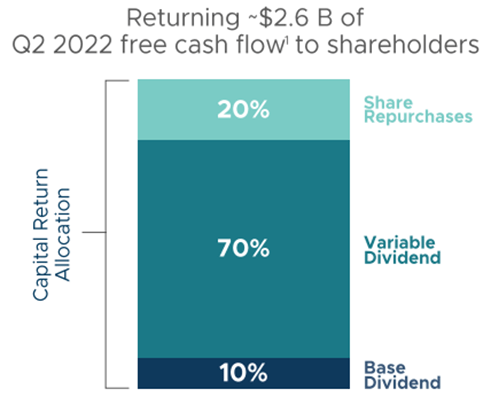 PXD trades at an attractive valuation relative to its own history. For instance, PXD's blended forward EV/EBITDA is one standard deviation cheap at 4.7x. 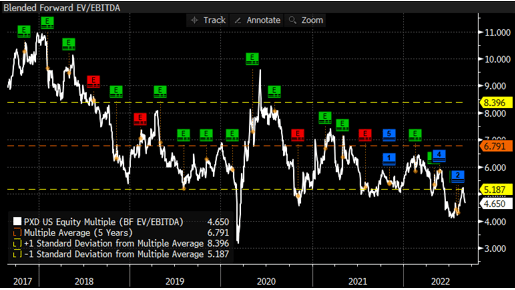 PXD's five-year historical average BF EV/EBITDA is 6.8x. If PXD's valuation were to revert to the mean, this would imply a 47.6% upside move from today's share price. Thus, owning PXD at current prices provides a large margin of valuation safety.

PXD has become popular among many investors due to its recent dividend increase. PXD has a trailing dividend yield of 9.7%, and the projected 12-month dividend yield is 13.4%. Therefore, shareholders of PXD can make a handsome return from the dividend alone.

Sheffield mentioned during a recent earnings call that he believes an oil price of ~$100 "will be the most likely outcome over the next five years." If he is proven correct, PXD should be able to maintain a double-digit dividend yield. 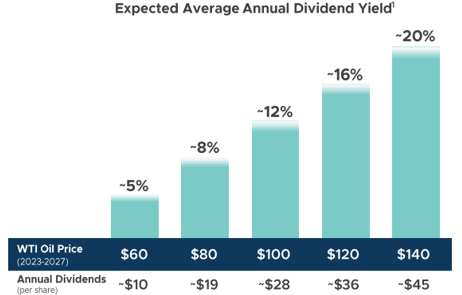 According to Naveed Rahman, co-manager of the Fidelity Equity-Income Strategy, dividends have contributed roughly 40% of the total return of the S&P 500 since 1930. Rahman also suggests that during decades when inflation averaged 5% or higher, dividends produced 54% of that total return. Therefore, dividends are an important factor in an investor's portfolio, especially during periods of abnormally high inflation.

In addition to its dividend, PXD also has capital appreciation potential due to its earnings growth outlook. Earnings per share is projected to rise to $33.59 in 2022, which would represent over a 300% increase from 2019's reported EPS of $8.18. 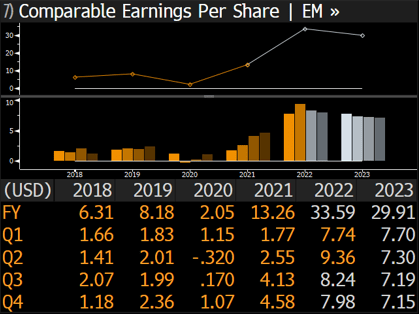 It is borderline absurd that a large-cap stock like PXD trades at a forward P/E multiple of 7x with that type of earnings growth profile. By comparison, the S&P 500 trades at 17x estimated 2022 earnings with cumulative earnings growth since 2019 of only 46%.

Considering the large upside move in oil and inflation this year, the energy sector still makes up a relatively modest portion of the S&P 500. For instance, the information technology and consumer discretionary sectors account for 27.0% and 11.5% of the S&P 500, respectively. The energy sector merely represents a 4.7% weight.

Sector leadership usually changes after bear markets. The energy sector appears poised to take the leadership baton from sectors that previously outperformed in the last bull market, such as the information technology sector. Secular bull markets in commodities are born from prolonged periods of underinvestment, which is precisely what has occurred in recent years with energy.

The chart below conveys the massive catch-up potential for energy relative to the sharp move higher in crude oil prices. 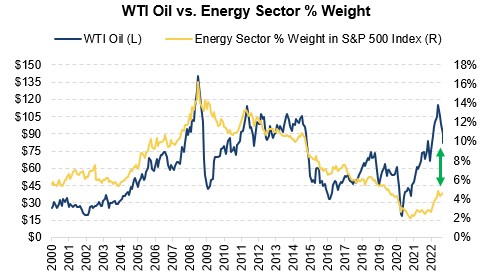 One potential risk is the ESG (environmental, social, and governance) investing movement. The growing ESG movement means increasing pressure to not invest in new oil production. As capital is diverted to ESG-friendly projects, the oil industry will suffer as a secular decline in oil consumption gains more traction. However, we are still quite a long way from a full transition from fossil fuels. For example, in the U.S., electric cars make up less than 1% of the cars on the road.

Another potential risk is the strength of the U.S. dollar. Year to date, the Invesco U.S. Dollar Index Bullish Fund (UUP) is up ~14.7% and the U.S. Dollar Index has shot to a 20-year high this year. Usually, this would be bearish for oil prices. However, since the beginning of 2021, the correlation between the USD and oil has been 0.78, while the long-term correlation since 2000 sits at -0.72. When the dollar rises, it is usually a risk-off signal for the economy - and bearish for commodity prices.

One additional risk is excess profits tax (aka, windfall tax). Democrats are considering new energy legislation as the Biden administration comes under pressure to relieve the burden of high energy costs. According to Bharat Ramamurti, deputy director of the National Economic Council, the Biden administration has not ruled out a tax on oil firms' surplus profits. Also, Senator Ron Wyden, an Oregon Democrat, intends to propose legislation that would make oil companies pay 42% on profits considered excessive.

Aside from the above-mentioned risks, the investment thesis for PXD remains compelling. Sustainable double-digit dividends do not come around very often. PXD is able to produce a sizable amount of free cash flow because it is one of the lowest cost producers in the Permian Basin. The company has been using its cash flow to reward its shareholders through large dividends. PXD also exerts commendable capital discipline by maintaining low levels of leverage, which contrasts the previous high production and negative free cash flow regime that devalued energy shareholder returns from 2014 until recently.