Three Reasons Why 2021 Was A Risky Year To Retire

Three Reasons Why 2021 Was A Risky Year To Retire

Before long, many may start to view The Great Resignation as a Great Big Mistake.

Over 3 million Americans decided to retire early amid the Covid-19 pandemic. The percentage of the US population in retirement has been gradually increasing for years, but this was a significant rise above the prevailing trend. 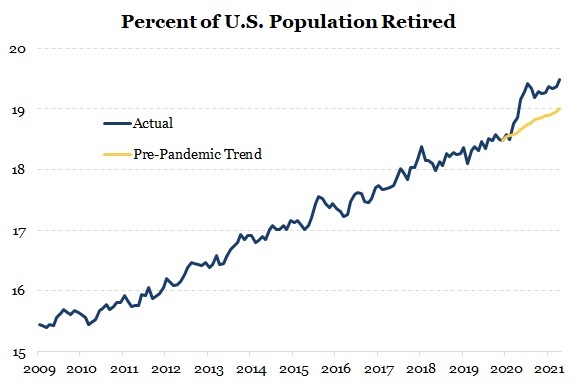 Surging stock and real estate values have led many to retire earlier than originally planned. The real net worth of Americans between the ages of 55 to 64 increased by 14.2% between the fourth quarter of 2019 and the second quarter of 2021.

But what if the recent surge in asset prices proves ephemeral? After all, the only certainty in markets is that prices will continue to fluctuate.

Keeping that thought in mind, here are three reasons why the recent retirement boom may have been mistimed.

One thing you don’t want to see happen right after you retire is a spike in inflation.

A year ago, the Consumer Price Index (CPI) was under 2%. Today, inflation as measured by the CPI, is the highest in 30 years at 7.9%. And judging by the recent price action in the commodities market, inflation shows no signs of abating anytime soon.

Inflation reduces the standard of living for all, but especially hurts retirees who operate on fixed budgets. Retirees are not in a position to demand higher wages that can help offset cost increases.

One of the most important commodities, WTI crude oil, recently surged above $120 a barrel. This is the sharpest spike above trend since 2008. 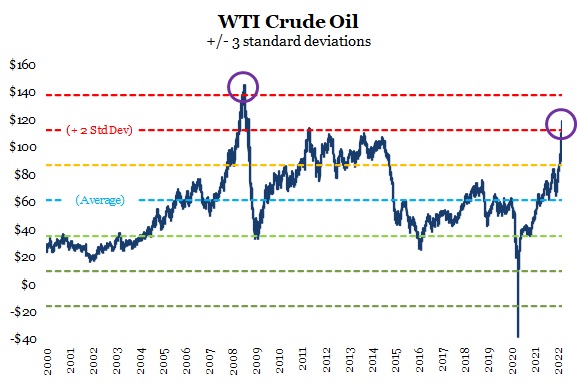 Food prices are also going up quickly. Supply dislocations tied to the Russia/Ukraine conflict recently caused a 5-sigma spike in Wheat prices. This will lead to higher prices for many food items, including things such as pizza, cereal and bread. 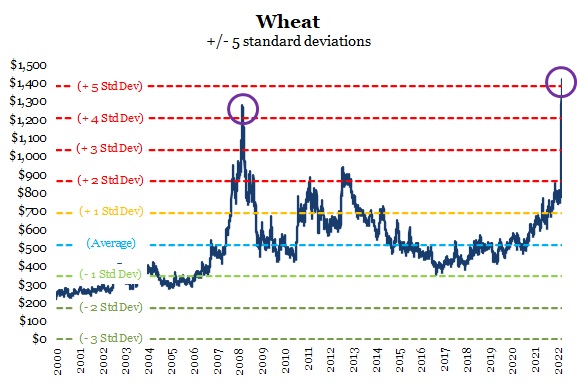 Another thing you don’t want to see happen right after you retire is a bear market.

When you retire heavily influences the survivability of your assets. To see why, let’s assume two investors have portfolios valued at $500,000. Each withdraws $25,000 the first year and then increases the amount 3% annually to account for inflation. Both investors average a 6.6% return and have a 30-year time horizon.

Despite these similarities, the two investors can still end up in radically different places. As shown in the table below, Investor A runs out of money in Year 20, while Investor B still has plenty of money left after 30 years. The reason is because even though they average the same annual returns, they do so in reverse order.

Investor A earns negative returns in the first three years, whereas Investor B doesn’t face that unfortunate string of negative returns until the final three years of his time horizon. This illustrates why the sequence of your returns can make all the difference! 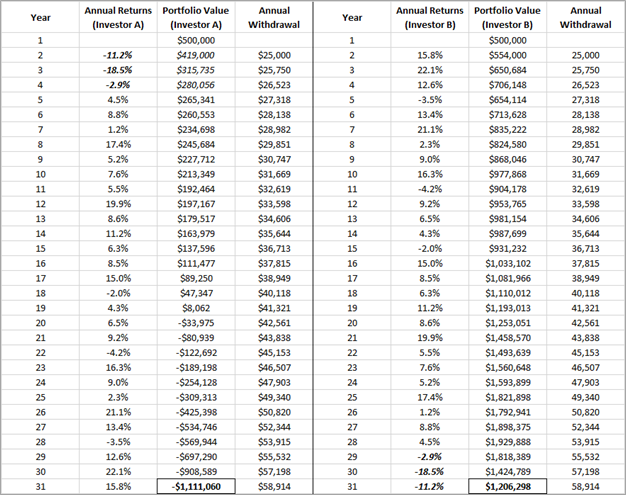 No one perfectly controls how their retirement timeline will overlap a market cycle. But we can hedge sequence risk to a degree if we understand how market cycles generally ebb and flow.

Throughout history, there have been multi-year cycles in which stocks have seesawed between two regimes:

The period of 2008 - 2021 saw the highest average annual return and lowest volatility of any regime dating back to 1930.

Eventually we’re going to see a flip back to an era of lower returns and higher volatility. So, rather than assuming a 10% equity return, an investor could project their retirement cash flows using a more conservative return assumption. For instance, JPMorgan’s expected return for a 60/40 portfolio over the next ten years is 4.3%.

Another thing you don’t want to see happen right after you retire is a nasty geopolitical surprise.

Unfortunately, society is now in a season when geopolitical volatility is unusually common.

In their 1997 book, The Fourth Turning: An American Prophecy, William Strauss and Neil Howe presented a framework that divided history into cycles lasting approximating 80 years. They did this after noticing a pattern in American history.

82 years after the Revolutionary War, the Civil War happened.

According to Strauss and Howe, history moves through cycles that last around the length of a long human life. Each 80-year cycle is sub-divided into four distinct eras called ‘Turnings’, which last about 20 years. 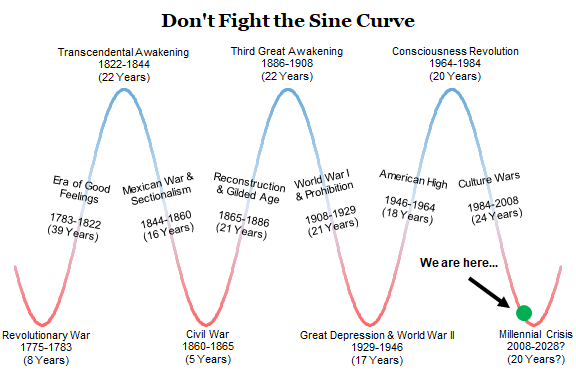 The First Turning is a “High.”  A High is a period of rising productivity, high economic growth, and widespread prosperity. Institutions are perceived to be strong and the public is unified on major policy issues. The last First Turning was from 1946-1964. It began after World War II and ended with the assassination of John F. Kennedy.

The Second Turning is an “Awakening.”  The Awakening is a period marked by a rising sense of personal autonomy. People begin to rebel against social norms and crave cultural renewal. The last Awakening was from 1964-1984. “Beatlemania” and the counterculture movement occurred during this era.

The Third Turning is an “Unraveling.”  An Unraveling is the opposite of a High. During this period, institutions become weaker as the public loses faith in its leadership. It is a time of broadening cynicism. The last Unraveling was from 1984-2008. It began with Ronald Reagan’s commercials touting individualism using the theme “Morning in America,” and ended on the eve of the Great Financial Crisis.

The Fourth Turning is a “Crisis.”  This is an era when institutions fall and are rebuilt from the ground up. Fourth Turnings are volatile periods that alter national identities. The Revolutionary War, Civil War, Great Depression and World War II were all Fourth Turning events.

Current tensions in places like Russia/Ukraine and China/Taiwan are normal in a Fourth Turning. So are big economic shifts, which may explain why we are seeing new currencies like Bitcoin emerge.

You can still plan for a successful future in a Fourth Turning. The only caveat is to expect the unexpected. That means stress testing your retirement plan.

Consider where you will be under multiple inflation and market scenarios, and always aim for a comfortable margin of safety to avoid running out of money in retirement.